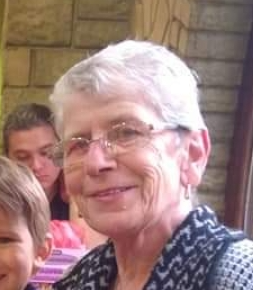 Kenneth Wilson (Kenny) was also in care and eventually joined the navy. He had a son called Shane. It is possible he has since passed away (2000 – 2010)

UPDATE
With great pleasure I can now reveal, that only a week after contacting Long Lost Families we found their older sister Doreen. Bernadette and Linda have just made contact for the first time in about 50 years.
That is Doreen in the picture above.
They spent sometime on the phone talking and getting to know each other. They also spoke with her son Sean who actually lives very close to them.
Sean told me “Its all quite surreal at the moment. I couldn’t remember them but my sister Kate could. We are hoping to meet soon and re-establish contact”. TheyÂ have yet to meet Helen.
Bernadette said “It was a magic moment talking to your sister after so many years. if you have any information on the rest of our siblings please, please let us know. Long Lost Families have been so helpful we cannot thank them enough”.
This is what drives us. Bringing happiness and contentment and filling that void in someones life. Changing peoples lives for the good.
If you have missing people in your life please don’t hesitate to contact us for a free consultation.
Tele: 07737 259732 or fill in the template.
https://www.longlostfamilies.com/how-to-apply/